At the edge of the Taylor Glacier in the McMurdo Dry Valleys of East Antarctica can be found a phenomenon so striking in appearance that it would appear to be a feature only of myth, fantasy or science fiction. What has been creatively-termed 'Blood Falls', is an outflow of saltwater from the tongue of the glacier, made unusual by its crimson colouration. It would appear that the 'blood' issues forth from below the surface - is it coming from the centre of the Earth?

Those familiar with Greek mythology might be reminded of the Phlegethon, the river of flame that passes through the regions of the underworld alongside the Styx, Lethe, Cocytus and Acheron. In his 'Inferno' Dante describes not a river of fire, but a river of hot blood flowing through the Seventh Circle of Hell, which boils the souls of those unfortunate enough to be sinking into it (Cantos 12/14). Here Dante encounters Attilla the Hun and Alexander the Great. Guarded by centaurs, the Phlegethon is the very permanent resting place of violent criminals and all those who caused hot blood to run while they were alive. Very apt, as they are now unable to escape it.

If the falls were indeed the opening of an underground river of hot blood, it would be relevant to question whether it would have a higher boiling temperature than the frozen water around it. Solutes dissolved in water raise the boiling point of the solution, and so blood would be expected to have a higher boiling point than pure water. However, the boiling point is raised by approximately 0.5°C for each mole of dissolved solute ions per kilogram of the solution. There is a complex mix of ions in blood, but the number of solute ions dissolved in it is not enough to raise the boiling temperature by any significant amount. Therefore, the blood will begin to boil at just above 100°C. It would therefore be creating impressive amounts of steam from the evaporation of the surrounding ice. 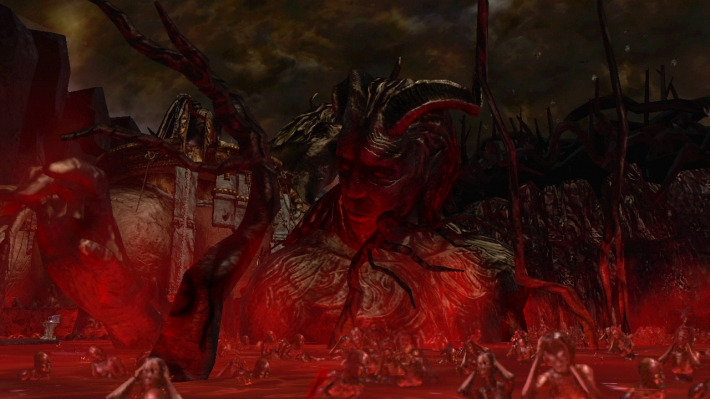 This week's post appears to be following on a theme from my previous article about Vampires, but as you might expect, the chance of finding blood flowing in rivers out of an Antarctic glacier is about as nonexistent as a vampire's reflection. While exploring the valley in 1911, Geologist Griffith Taylor, after whom the glacier was named, first discovered the red colouration. The explorers attributed the red colour of the falls to red algae. Most varieties of red algae prefer marine environments, and some freshwater species are found, yet they generally prefer clean running water. In the glacier environment, it would not be implausible that the water would be clean and filtered and the perfect environment for such colourful algae. A phenomenon known colloquially as 'Red Tide' is actually caused by algal bloom. It usually occurs in coastal areas, where algae in the water colour the surface water making it appear red, pink or brown. These blooms are often termed 'Harmful Algal Blooms', as they are associated with the production of natural toxins and depletion of dissolved oxygen, bad news for the local marine wildlife and also harmful to any humans who come in contact with it.

This explanation has enough threat attached to lend dramatic weight to the associations with the Phlegethon from Greek mythology, however half a century later, a discovery was made that would completely overturn the accepted theory for the mysterious 'Blood Falls'. In the mid 1960s, Robert Black of the University of Winsconsin discovered that the red colouration of the polar ice was in fact the result of iron salts emerging from the sheets of ice. As it is the iron ions in haemoglobin which give blood its crimson colour, it begins to appear that 'Blood Falls' could be the mot juste the phenomenon deserves. Still the source of the iron salts remained unexplained.

It was not until 2003 that Ohio scientists provided an explanation. They suggested that thousands of years previously some saltwater had become trapped and the glacier formed on top, freezing and trapping the saltwater beneath. They proposed that the slowly-moving glacier was slowly pushing the deposits out from the ice. In 2009, a team from Dartmouth College, Hanover (US) took this explanation further when they made the staggering discovering of a microbial ecosystem beneath the surface. The subterranean pool is rich with salts, including sulphate and ferric ions, and an ancient community of microbes. Seventeen types of microbe were found in the saltwater, but it is suspected that there could be up to thirty types present.

These microbes live in an extreme environment in a pool of water below the glacier: high in salt and with no light or oxygen. The temperature of the water is -10°C, but it does not freeze because it contains about ten times as much salt as seawater (This is the result of how solutes change the freezing and boiling temperatures of solutions and is also of relevance later in the article). Without light or oxygen, the microbes must be exhibiting a unique metabolic process that has never before been seen in nature. They appear to respire using the iron in the water, using sulphur as a catalyst. They also metabolise traces of organic matter trapped in the water with them. 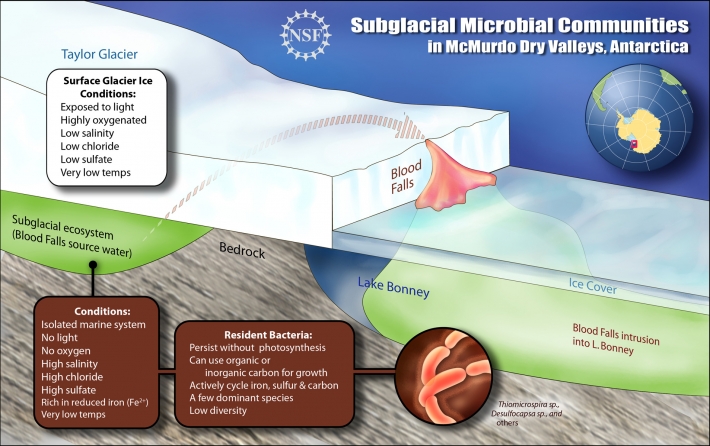 This discovery has more far-reaching implications for Astrobiology and the search for life in other parts of the solar system. Extreme conditions for life can be studied at the Taylor glacier with little intrusion into the polar ice caps, resulting in less damage to the environment. Such research can help astrobiologists understand where to look and the variation to expect when looking for life elsewhere in the universe. This discovery suggests strongly that life on other planets could be hidden from view, beneath the surface in subglacial, oxygen-free water environments that would otherwise seem inhospitable to life.

The iron-rich water that sustains the microbial ecosystem is drawn from the subterranean pool up to the surface of the glacier, possibly by the movement of the glacier itself. It seeps from an outlet approximately 4km from the subterranean pool, where the iron ions are oxidised upon meeting with the air. This forms iron oxide, or rust, giving the water its characteristic red colour. This results in the red 'Blood Falls' that has been such a puzzle to scientists across most of the last century.

Unfamiliar geography such as this can be a sign of alternative life forms hidden from view. Though we now know a lot about the interior of the Earth, from study of the Earth's motions in the solar system, its gravitational and magnetic fields and observation of surface rocks, the inside of our planet is still an inhospitable and unexplored environment. There may be much more we have yet to discover. Jules Verne had elaborate and fantastical ideas about the interior of the Earth, which he documented in 'Journey To The Centre Of The Earth'. The story is based on the protagonists' belief in volcanic tubes connecting the centre of the Earth with the surface. Having descended below the surface through a passage via the Icelandic volcano Snæfellsjökull. Verne's theories have since been proved wrong, but we can admire his open-minded speculation and ability to conceive of the existence of biology and geography quite unlike what we're familiar with. Sometimes the truth is far more surprising than we otherwise would imagine. Griffith Taylor and his team chose a plausible solution by suggesting the red colouration of 'Blood Falls' was the result of algae in the water, but the hidden truth of the microbial ecosystem was still waiting to be discovered.

Astronaut hibernation, 'stasis' or 'hypersleep' has allowed writers of fiction to move their protagonists into deep space, overcoming both the problems of long-distance space travel and allowing for swifter movement of the plot.

Depictions of vampires over time have ranged vastly, from a decaying zombie-like figure kept alive only by draining the life force of other beings, to the dangerously intelligent and charismatic vampire of modern