If anyone has wondered why the blog, and 'Novel Ideas' in particular, has been quiet over the past couple of weeks, my only excuse is that I was taking a break, over which many novels were read, a couple of which I posted about recently. Unsurprisingly, all three I previously mentioned seemed to have a whiff of science fiction about them, even the apparently very 'literary' 'Life After Life' by Kate Atkinson.

While reading Atkinson's novel, I was surprised how I was not, on the whole, confused by the novel's constant 're-writing' of the turbulent events of its protagonist, Ursula Todd. The slipping forwards and backwards in time, showing various ways in which Ursula's life could be altered by small events and decisions, may have emerged a as mess in the hands of a less subtle writer. Atkinson succeeds in leaving footholds for the reader in the right places, to gain an understanding of Ursula's place in life, what has recently happened that we might remember and exactly what has changed.

This left me wondering what it was about the novel that made it clearly not science fiction, despite utilising the popular SF theme of alternate history. The idea of a novum has long been thought of as key to science fiction, but it was only 1972 when Darko Suvin suggested that the novum, or alternative 'imaginative framework', was key to defining the genre. The novum is a 'new thing' that transforms the world in the novel and separates it from the world of the author. It could be a time machine, some new technology, a discovery or invention, or in the case of alternative history, a significant change in the outcome of history. For some context, the second most popular point of divergence in alternative history is the outcome of the American Civil War. The most popular, unsurprisingly, posits an Axis victory in WWII. Atkinson's novel is based around a series of nova, though very few of them could be considered as world-changing as the outcome of war. Except for one... it involves Ursula Todd in a cafe with Hitler, Kirschtorte and Schokolade (very important), and a gun (arguably more important) - Do you see where this is going?

Killing Hitler at the height of his power is unlikely to have put an end to the war, or to have secured an Allied victory. Though many have speculated about what the world would be like if the Nazis had claimed victory during WWII. It is unsurprising why it is such an appealing topic, especially to depict a nightmare scenario. Time travel is sometimes cited as the novum which makes possible the change in history. Sometimes Nazi victory is the result of the interference of time travellers, sometimes it is also reversed by the interference. Harry Turtledove's World War Series exists in an alternative history caused by a more complex series of events than a simple change in who won the war. At the height of the conflict of WWII in 1942, alien invasion means that the Axis and Allied powers must join forces to pit all of humanity's might against the threat from an extraterrestrial enemy.

In most cases, writers settle for a scenario in which the Nazis and the Japanese Empire have conquered all of, or most of the world, so there are no other majors powers left to oppose Nazi rule. Though the Nazis may not have planned ahead as whole world domination, the idea that Germany required 'lebensraum' led to plans for expansion. Robert Harris' 1964 novel Fatherland contains a fictional map of 'The Greater German Reich', but many of the real and planned names for parts of the Reich are included, so it is not a wholly inaccurate depiction of the intended expansion. 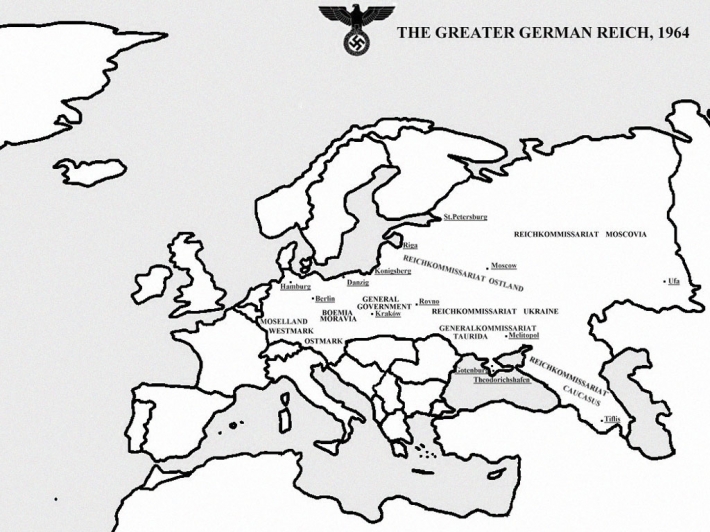 Europe as The Greater German Reich, from Robert Harris' 1964 'Fatherland'.

In these alternate histories, the imposition of extreme Nazi ideology is the novum which radically alters the world we're familiar with. Extreme views and the ambition to form an Aryan master race suggest that the Nazis would not have settled for anything less than this world-wide Empire, as depicted in so many novels and films. Most threatening of all, and providing the greatest opportunity for writers of science fiction, is the idea that the Nazis were developing 'advanced' technology in secret, and the conspiracy theorists who claim they got much farther than history suggests.

Under the pressure of war, German military technology advanced very rapidly. In the years leading up to the second world war, German scientists were clearly very prominent in their fields, and a string of Nobel Prizes went to German scientists, or scientists affiliated with German universities. These include Albert Einstein, Werner Heisenberg, Gustav Hertz and Erwin Schrödinger for Physics alone; many German scientists also won Novel Prizes in Chemistry in the years proceeding the war. Conspiracy theorists, popular culture and writers of alternative fiction have extended this to exaggerate the technological capabilities of Nazi Germany. Some say the Nazis landed on the Moon (to achieve Hitler's desired 'Lebensraum'), were contacted by aliens, were close to developing an atomic bomb or were attempting to harness the power of the sun into something referred to as a 'Sun Gun'. The complexity of Nazi technology is a matter of intense debate, though many novels, films and games have used it as a basis for terrifying dystopian worlds.

The Wolfenstein series, an old franchise of games set in WWII, focuses on Nazi-antagonisation, stealing of war plans and thwarting plans to unveil 'secret weapons'. Though the latest edition to the series, 'Wolfenstein: The New Order' reveals Europe in an alternate 1960s in which the Axis powers won the second world war, where the player is part of a group resisting Nazi control. The tide has been against the Allies as a result of advanced technologies developed by the Nazis, the knowledge of which they have stolen from a secret society. The 2009 release in the Wolfenstein series suggests a supernatural influence, as there is talk of parallel universes, magic and amulets. This game has strong science fiction elements, but this appears to be influenced by ideas of Nazi occultism, unlike The New Order's greater sense of realism. Senior Gameplay Designer, Andreas Öjerfors, has commented on the choices made in creating the alternative history universe, drawing attention to the 'general sense of weirdness' gained by exaggerating stereotypical aspects of the Nazi Party: 'larger than life leaders, strange technology, strange experiments.' So this seems to be as much a parody of Nazi ideology and obsession as it is a speculation about what they could've achieved, had they made different choices regarding military technology. 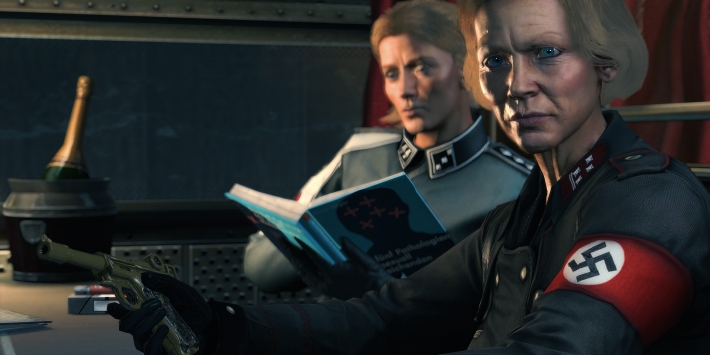 Even though attempts have been made to provide rational explanations for some aspects the Nazi's swift expansion (An improved version of concrete is cited as the reason why they can build cities so quickly), but some features of the game are more difficult to explain. The Nazis have achieved all the things in history that have been achieved by other nations in our own world. It is a eerily similar world where a Swastika, not the Stars and Stripes, flies on the Moon, and armoured Nazi soldiers parade alongside well-known landmarks, such as the Houses of Parliament. Even music has not escaped being Nazi-fied. Music didn't develop differently in this Nazi-occupied universe; the world did not miss 'House of the Rising Sun' though it exists with added accordion. The sense of this universe being so close to our own, but not quite, heightens the terror of the created world. This fits with Freud's notion of 'the uncanny', which suggests that something can be both familiar and alien at the same time, and this causes a feeling of discomfort or revulsion. The 'uncanny valley' effect was coined by Masahiro Mori, to apply to human aesthetics, but it makes sense in relation to an alternative universe. This theory suggests that revulsion is caused when a human likeness moves and looks almost, but not perfectly, identical to a real human. A sense of familiarity increases the closer something gets to a human, or familiar, likeness, and drops off suddenly to evoke feelings of revulsion when it becomes very close to appearing human. It could be said that this Nazi-occupied universe, which is so similar to the one we are familiar with, but with terrifying and slight alterations, could lie within this 'uncanny valley'.

Though it comes to the fore in 'The New Order', the threat of advanced technology can be seen in many of the earlier games. A character called 'Deathshead' is the driving force behind providing the Nazi regime with advanced technology. Powerfully-armoured and heavily armed, cyborg soldiers called 'Lopers' are just one of the creations who, with their terrifying presence in the game, give the impression of formidable military technology. Though cyborg soldiers may be an exaggeration for dramatic effect, German science and technology did make great developments during wartime and the Nazis did propose some quite far-fetched suggestions. Were they even remotely close to becoming the technologically-advanced war machine that games like Wolfenstein suggest? Did the Nazis have any ideas that may have seemed like science fiction, but may have been within their grasp? Sorry to leave at a cliffhanger moment, but all this will be explored in my next article.

Following the discussion in Part I of alternative history games and novels that depict a world in which the Axis powers won World War II, I intend to investigate the reality of German

An average day working at the Scottish Book Trust feels like quite an indulgent and exciting experience, as I get to talk about, and encourage other people to get involved in, two things